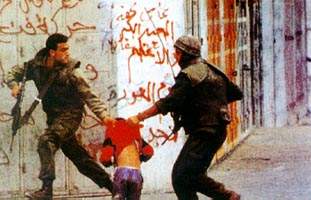 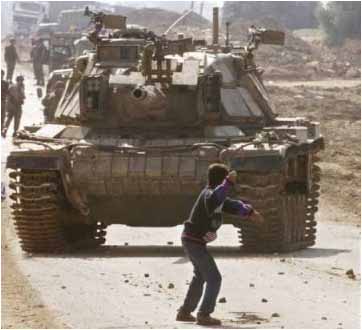 All your armies, All your fighters,
All your tanks and all your soldiers.
Against a boy holding a stone,
Standing there all alone.
In his eyes I see the sun,
In his smile I see the moon.
And I wonder I only wonder.
Who is weak and who is strong,
who is right and who is wrong.
And I wish I only wish.
That the truth has a tongue. (Qasem Qasem, 2000)

Too many mothers have lost their children

In'am Oda, 41, the mother of Faris, one of the more famous Palestinian boys to be killed by Israeli soldiers, sits by her sister Iktimal, 40, who also lost her son only two days afterwards and in the same spot.

Faris, 13, was killed on 11 November near the Muntar crossing in Gaza. A poster of him facing an Israeli tank with just a stone in his hand hangs on nearly every wall in the Palestinian territories. She points at the poster on her wall and says, “This hero is my son. But what did he do to deserve this? Is it because he was carrying a stone?”

In'am and Iktimal tell their stories, trying so hard to stop tears from flowing at the mention of their sons. In’am, a mother of 9, says, "I used to go out every day like a mad woman, looking for my son in the Karni area near our house where clashes take place between Palestinian youth and the soldiers." She says, "I haven’t been able to sleep or think
since his death because the question haunts me - is it my fault he died or did God just decide to take him away from me?"

She goes on, "Nobody would believe what goes on here. One time I went looking for my boy, and I got to the area where a real battle seemed to be going on. Bullets were falling on these kids like rain. I just sat on the floor screaming hysterically, grabbing any child who passed by, thinking he
might be my son."

In'am and her sister have spent their lives together, having married two bothers, but they did not know that they would also share this everlasting sadness together. Iktimal, the mother of 8 children, says, "Sadness is clear on the faces of his brothers and sisters." She hugs her own son's picture and says with tears in her eyes, "He couldn’t handle watching his cousin die in front of him." She says, "My son is gone, but who can guarantee that I wouldn’t lose any more of my children? Our house is just down the road from the clashes... My children cannot get their brother and cousin out of their minds, just like all the other Palestinians who have lost their loved ones... Where can I hide them to keep them safe?"

The 39 year-old mother of Nael Al Nasheet says, "I didn't know that it would be the last time I would ever see my son. I prepared him some breakfast while he watched scenes of the clashes on television. I didn't sleep the night before he died, because it was one of the unforgettable nights in the West Bank and Gaza; 10 Palestinians were killed during clashes. I cried so much, and I didn't even know that I would be saying goodbye to my own beloved son the next day. Will I never see him again? Those Israeli murderers killed him. I don't wish for them or anyone to go through what I am going through and feel what I am feeling. I wish God would let them see reason, the same god who chose my son and left
me and his father in so much pain."

Mothers place flowers at the Martyrs Square in the centre of Gaza and thousands of children sit reading the poetry written under the names of the children who have died. This scene is repeated daily at the square, which was built in the 1950s and has a statue of a soldier carrying a gun.